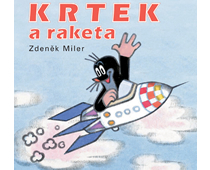 Little Mole and the Spaceship

In Little Mole and the Spaceship, Mole discovers an unknown object under the ground – a space ship. Curious, he climbs into it and finds it has a large button inside. What happens if he presses it? Is it a bell? He is a little afraid, but in the end pushes it. Instead of a bell, however, he hears a sssshh, rattattat, boom boom… The space ship starts up and shoots up into the clouds… Mole had this adventure in 1965. Not in his wildest dreams did his author think that 46 years later, a stuffed Mole would be heading into space for real…

After the film, Miler also created Little Mole and the Spaceship in book form, and it was first published in the same year. It is the only Mole book for which Miler also wrote the text, as well as drawing the pictures.

The book has been translated into a number of languages – German, English, Hungarian, Finnish, Russian and Chinese – and a Japanese edition is planned. Little Mole and the Spaceship has entertained audiences both young and old in numerous countries in Europe, Asia and Africa.